On April 26, 2021, The Albert Wisner Library in Warwick, New York hosted this informative lecture about two of New York State’s most distinguished presidential hopefuls; William Seward and Geraldine Ferraro.  We’re honored to have the permission to stream this video here, courtesy of the Albert Wisner Library and Johanna Yaun. Both presidential candidates had their own unique challenges while introducing commendable ideals to their respective political arenas. In Seward’s case, he had a formidable enemy in Horace Greely. 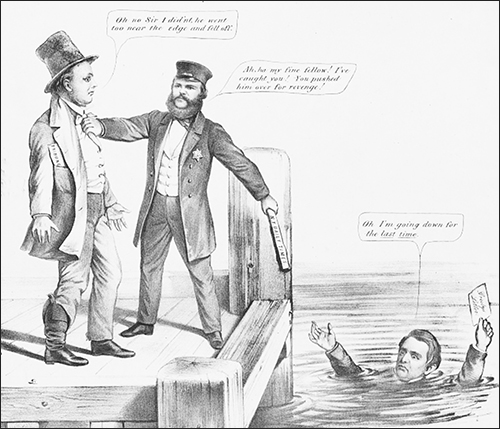 In this cartoon Horace Greeley is depicted as unwilling to help Seward attain the Republican nomination to run for the 1860 presidency.

Horace Greeley was the Editor of the New York Tribune, which he founded in 1841 after earlier founding a weekly newspaper (The Jeffersonian) at the request of Thurlow Weed. Weed was Seward’s principal political advisor. As a founding member of the New York Republican Party, Greeley deeply resented not having been considered for a Cabinet post in what was then assumed to be the inevitable Republican Seward Administration. It was widely believed that Seward would be the nation’s 16th president. Abraham Lincoln was a Dark Horse candidate back then.

At a time when everyone read the newspapers, Greeley’s New York Tribune withdrew its support from Seward, effectively costing the former New York Senator and Governor 35 electoral votes. In the cartoon from , the police officer is saying “…I’ve caught you now! You pushed him over for revenge!” as Seward drowns.

Although an ardent supporter of Abolition, after Lincoln’s election Greeley argued in favor of letting the South secede. Then, he and the New York Tribune urged “On to Richmond” before the Battle of Bull Run in July 1861. After the battle, Greeley’s tone changed dramatically. Nevertheless, the mercurial Editor was to be a thorn in Lincoln and almost everyone else’s side at one time or another. Yet, Greeley was a truly unique American phenomenon. He is most remembered for his mantra “Go West young man!” His home in Chappaqua, New York deserves a visit. It is charming and defines what a “house museum” should be. See for yourself. Visit The Horace Greeley House Museum.