A distinguished soldier and citizen

At the age of 21, William E. Mapes enrolled in the 124th New York State Volunteers, an illustrious regiment that came to be called “The Orange Blossoms”. He volunteered to serve three years and mustered in as a second lieutenant, Company B, on August 14, 1862. He was promoted to first lieutenant on February 9, 1863 and was wounded in action on May 12, 1864, at Spotsylvania Courthouse, Virginia. He chose to stay with his regiment. Mapes was mustered in as captain, Company H, on May 31, 1864. He was severely wounded, losing a leg, at Strawberry Plains, Virginia.

On December 15, 1864, Captain Mapes was discharged for his wounds.

After the Civil War, he married Ruth Rumsey and had 9 children. He was elected Clerk of Orange County for six years and subsequently served another six years as County Treasurer.

About the William Mapes memorial

In 2018, Civil War historian Charles LaRocca proposed a memorial in Captain Mapes’ honor be placed at the site of his family home. Citing a quote from the young man’s 1864 letter to his family, he felt it best represented the patriotic sentiments of Mapes as well as so many other volunteers in those tumultuous days.

“I want your opinion whether my acts and services to my country will be appreciated enough … for Florida to erect some lasting monument or tablet for “Copperheads”* to look at in all ages to come … & as they looked at it could feel the burnings of reproach & regret that they were ever traitors and my opposers.

Tell my good friends that I think of them often, which inspires me to go forward in the performance of duty & with my sword hew out my way to distinction. I hope they may never have reason to regret that they advanced me . . . Tell them my voice is still for war until the stars & stripes float again over every inch of American soil.” 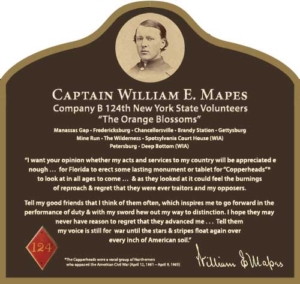 This William E. Mapes bronze plaque was cast in 2018 and will be installed at the Homestead once the restoration work is completed.

The Battle of Spotsylvania Courthouse

n May 1864, Confederate forces clashed with the advancing Union Army in the Battle of Spotsylvania Court House, which lasted for the better part of two weeks and included some of the bloodiest fighting of the Civil War. After an indecisive battle in the dense Virginia woods known as the Wilderness ended on May 7, Union General Ulysses S. Grant and the Army of the Potomac marched southward, meeting Robert E. Lee’s Army of Northern Virginia once again at the crossroads town of Spotsylvania Court House the next day. Over the 12 days that followed, Union troops briefly broke the Confederate line, but the rebels managed to close the gap and hold their ground. The battle, which cost 18,000 Union and 11,000 Confederate casualties, included nearly 20 hours of brutal hand-to-hand combat at the infamous “Bloody Angle,” a section of the Confederate salient, on May 12-13. On May 21, Grant disengaged his troops and ordered them to continue their march south toward the Confederate capital of Richmond.